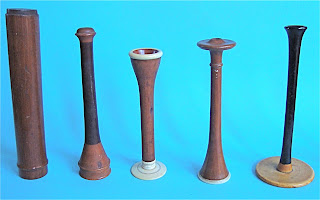 Nearly two thousand four hundred years ago Plato said "necessity is the mother of Invention" The act of listening to body sounds for diagnostic purposes has its origin further back in history, possibly as early as Ancient Egypt.Rene Theosophilus Hyacinthe Laennec learned as a child that sound travels through solid materials, a fact that had probably been known for quite some considerable time. Often its the case that an invention has to wait for the relevant technology to be in place, but why did it take until 1816 for somebody to roll up twenty four sheets of paper as a tube to listen to chest sounds? Many doctors before had placed their ear to the chest of their patient to listen for sounds to aid their diagnosis and surely Laennec was not the first to be embarrassed in this situation.
Laennec was an experienced wood turner and produced a number of stethoscopes, slightly changing the length and the design in the process. The Science Museum, London, has one of these in their collection, with a paper label glued on the outside, giving its provenance, (image no. 10322024). How many more were made by Laennec is not known, as they were not signed.However, one original Laennec stethoscope was purchased in 1991 by Doctors Yola and David Coffeen from Tesseract. This stethoscope has a wonderful provenance, taking it from 1819 to the present day, as the following entry from the Tesseract catalogue reveals:

The stethoscope is contained in a fine late 19th century case, affixed with a silver plaque beautifully engraved with the declaration that Laennec, who had had training as a wood turner, made this instrument himself, and with the provenance of ownership -- "STÉTOSCOPE (sic) tourné par LAENNEC offert par lui au Professeur LOBSTEIN de STRASBOURG qui le laissa à HIRTZ qui à son tour le donna au Professeur STRAUS." (Translation: Stethoscope turned by Laennec and offered by him to Professor Lobstein in Strasbourg who left it to Hirtz who in his turn gave it to Professor Straus.) Visible in ink on the stethoscope itself is the signature "Lobstein" with traces of additional writing (Note: Under ultraviolet light this inscription is more distinct, but still incomplete. It includes the word "stethoscope" written twice.) A handwritten letter from Louis Pasteur's grandson, Prof. Pasteur Valléry-Radot, dated 10 July 1966, accompanies the instrument, declaring: "Ce stéthoscope de Laënnec a été entre les mains de Lobstein, de Hirtz, de Straus et de Grancher. Il m'a été donné par mon parrain le Professeur Grancher, en 1905. Je l'ai gardé jusqu'à aujourd'hui. Paris, le 10 juillet 1966." (Translation: This stethoscope of Laennec was in the hands of Lobstein, of Hirtz, of Straus, and of Grancher. It was given to me by my godfather, Prof. Grancher in 1905. I have kept it until today. Paris, July 10, l966.)

Thus, the stethoscope was given by LAENNEC to his friend Prof. JEAN-FREDERIC LOBSTEIN, le jeune (1777-1835, Director of the museum of the School of Medicine in Strasbourg in 1819, at the same time named to the Chair of Pathological Anatomy, and author of a number of articles on pathological anatomy which supplemented articles written by Laennec), who gave it to MARC-MATHIEU HIRTZ (1809-1878, Head of the Clinic at the Medical School in Strasbourg, professor of pathological and clinical medicine, member of the Academy of Medicine -- named in 1873), who in turn gave it to ISIDORE STRAUS (1845-1888, who was "Agrégé" at the School of Medicine in Strasbourg, when the German invasion of Alsace forced him to flee to Paris, where he worked with Chamberland in Pasteur's laboratory. He was an open partisan of Pasteur's theories. In 1883, he was part of an expedition to Egypt which was sent to combat an epidemic of cholera). The stethoscope was passed on to JACQUES-JOSEPH GRANCHER (1843-1907, who was known from very early in his career for his work in percussion and auscultation. He later became clinical professor of pediatrics, and was instrumental in early childhood vaccinating based on Pasteur's work.) He was the godfather of LOUIS PASTEUR VALLÉRY-RADOT from the latter's baptism on May 13, 1886. Valléry-Radot (1886-1970) was the son of René Valléry-Radot and Marie-Louise Pasteur, fourth child of Louis Pasteur. He himself was a prominent physician and writer, and member of the Académie Française. Grancher gave the instrument to his godson, who sold it privately in 1966.

Provenance, when it can be assigned without any uncertainty, is a tremendous plus for enhancing the value of a scientific instrument, especially when it is from the owner and inventor of the piece. Unfortunately very few instruments come on the market with undisputed provenance, a paper label or even an engraved inscription can still be very effectively faked, but the power of celebrity ownership was shown a few weeks ago, when three objects owned by Mahatma Gandhi, a cheap watch, a pair of sandals and a brass bowl fetched £1.4 million at Antiquorum, in New York.

We'd like to hear from any exhibitor at the Scientific Fair who will be bringing an instrument to sell with an interesting provenance.
Posted by Fletcher Wallis at 19:10