How much research is enough? 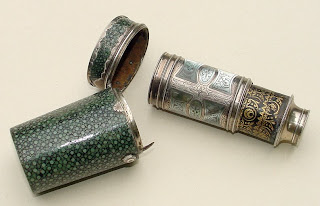 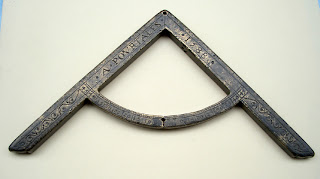 We at Tesseract pride ourselves on finding arcane objets of science and medicine, and on researching them thoroughly. But we feel our research is always incomplete; rarely can we even answer of the journalist's six basic questions: "WHO, WHAT, WHEN, WHERE, WHY, and HOW".

Here we present two examples, and would welcome further insight. We have in stock a monocular of truly exceptional quality, certainly 18th century, and probably English, based on the casework with its scalloped silver trim, etc. But WHO made it and WHERE? Perhaps the leather stampings can be identified, or the style of engraving on the mother-of-pearl. Many analyses could be done, from the origin and species of the rayskin, to impurity content of the silver, to microarcheological studies of pollen grains, etc., caught as dust in little crevices. Where does / should / must one stop?

Secondly we have a fascinating level, described as follows:
SIXTEENTH CENTURY LEVEL, PROBABLY FOR GUNNERY, Continental, signed “A. Pourtales, 1588.” The level is of sturdy brass, 7-5/8” (19.5 cm) wide from foot to foot, and over 1/4” (7 mm) thick. An integral 90° arc is divided every degree 0° ± 45° and labeled every 5°. There are distinctive early numeral shapes, in particular the z-shaped “2” and the slanted topless “5.” The vertex is pierced for use with string and plumb bob. The arms are decorated with sinuous floral designs, engraved and punched. Surfaces have linear outlines throughout, and there seem to be small traces of gilding. The reverse is otherwise plain but for a preliminary scale division on the arc. Condition is good, the brass with a fine dark patina, noting nicks and a stress crack in the arc.
This is a splendid example of early level, probably made for setting elevation (or depression) of a cannon . Bion (1709) shows a similar level on the breech of a cannon, and various forms of gunner's level are illustrated by Bennett & Johnston (The Geometry of War, 1500 - 1750).
The year 1588 is significant, signalling the defeat of the Spanish Armada (with its invasion fleet of 130 ships!) by the British. It is difficult to pin down the maker; the name “Pourtales” itself is widespread. In one name search, for example, we find a Count Albert Pourtales exploring the Wild West in the early 19th century. He was born in Paris, but a descendent of Huguenot refugees who had emigrated to Neufchatel (Prussia, now Switzerland) in 1720. His father served in the Prussian army, then for Napoleon, and finally for the Berlin court. The numeral shapes are another small clue to origin, the “2” form suggestive of a German origin. But more research needs to be done.

So we know WHEN and by WHOM it was crafted, but WHERE was it made, and for WHAT exact purpose? And how do we even approach these questions? Such mysteries, in fact, are the real fascination of our business.
Posted by Fletcher Wallis at 18:10 1 comment:

The exchange rate is looking good!

The exchange rate is looking pretty good at the moment for our colleagues in the USA who are thinking of coming over for the fair in April, in fact, almost the best its been since records began, except for almost parity in 1985. I can remember almost selling out of stock at this time but when I went to replace it I suddenly found all the prices had gone up! Some time in the early twentieth century W. F. Stanley produced “Higgins Patent Calculating Triangle”. The exchange rate only seems to go from 4.80$ to 4.90$ so I guess that puts it in the first quarter of the twentieth century. I googled the calculator to see if I could find out more only to discover one appearing at auction on March 28/29! The sale is with Philip Weiss Auctions .

The weekend of Mar. 28-29 will comprise three sessions – two on Saturday and one on Sunday. The first Saturday session, beginning at 10 a.m., will feature an impressive collection of medical and scientific instruments. Included will be medical and dental items; a collection of calculators and slide rules; office items (early check punches and registers); and pre-1950 spy and surveillance equipment. 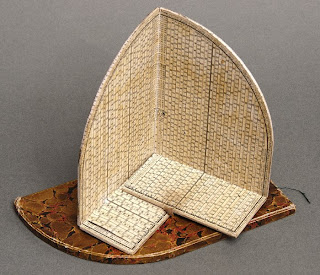 Peter Delehar started the Scientific Instrument Fair in London 24 years ago and has enthusiastically dealt in esoteric and interesting instruments in the same shop his father started 90 years ago this year.Peter has a reputation for exhaustive research on most of his pieces and this one is no exception:here's what he has to say about it:This rare, unusual instrument, is made of glazed paper on card and is contained in its original marbled card slip case. It is entirely covered, on both sides, including the edges, with tables, gauge points and an arc for use as a clinometer. It was invented in 1852 by Maximilion Robert Pressler (1815-1886), the father of the modern science of forestry.
It is signed *PRESSLER’S INGENIEUR-MESSKNECHT Tharand. Dresden*. The scales include those titled ‘*Reciproken*’, ‘*Bogen*’, ‘*Kreis*’, ‘*Qw*’, ‘C*w*’, ‘*Centi*’, ‘*Tg*’, etc. and many conversion factors.

To use this as a clinometer the flaps are folded over each other (they are not the same length to allow for the thickness of the card) and it is placed on a post or held in the hand. The plummet (bob missing) indicated the angled observed with the missing, loose sight. 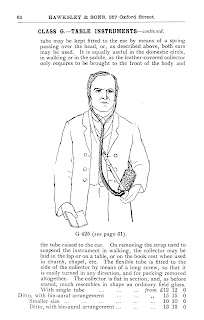 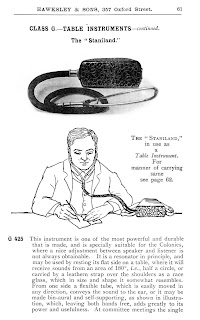 I've just come across a catalogue I'd mislaid in a mountain of paperwork. Its a 1912 catalogue of Otocoustical Instruments to aid the Deaf. Many of the instruments are disguised aids discretely covered in hair or camouflaged as a vase of flowers on the table. This one proudly tells the world "I am hard of hearing" and looks like a very large early twentieth century iPod! The amplification of these devices isn't often very many dBs but obviously seeing somebody carrying such a device is going to make people speak to them much more loudly than they would otherwise. This one is known as the "Staniland" and cost a staggering 15 guineas, ie £15.75, in 1912. To see a very good collection of eartrumpets, look at fair exhibitor, Laurie Slater's website at www.phisick.com
There's a very good book on antique hearing devices written by Elisabeth Bennion and available from
www. vernier.co.uk .
Posted by Fletcher Wallis at 13:31 No comments:

Many collectors like to pop into Portobello Road on the Saturday before the Scientific Instrument Fair, but when they come in April they will find the whole of Lipkas Arcade in Westbourne Grove shut down for renovation. Four dealers in scientifc and pharmaceutical antiques have been forced to move out. Fletcher Wallis has moved to the basement of the Admiral Vernon Arcade, Andrew Crawforth has moved further along Westbourne Grove to 292, Lawrence Cooper, The Antique Dispensary Ltd, has moved up the Portobello to the Chelsea Arcade, just down from Vic Burness, who is still in Roger's. I'm not sure yet where Michael Forrar, Principia Fine Art is moving to, but more of this in future posting.
Posted by Fletcher Wallis at 12:23 No comments:

How did a farmer weigh his cow sheep or pig in the field?

In the nineteenth century, how did a farmer weigh his livestock in the field? He might have used a clever little slide rule known as "The Cattle Gauge & Key to the Weighing Machine" arranged by J Ewart, Newcastle on Tyne. These rules were often manufactured by James Tree of 22, Charlotte Street, Blackfriars Road, London. The method used involved measuring the length and girth of the animal and using a ready reckoner on the rule, giving percentage values of meat on the carcass, to calculate the weight using a series of gauge points. The rules are made mainly from box but sometimes with ivory slides and occasionally completely from ivory. The Tree family made rules at Charlotte Street from 1832-1895, according to the Directory of British Scientific Instrument Makers 1550-1851, but these rules probably date from the second quarter of the nineteenth century. Although this rule is uncommon, its just the sort of thing that turns up at the fair. Several dealers specialise in slide rules and calculators, notably David & Yola Coffeen, from Tesseract , Peter Delehar , and Desmond Squire .
Posted by Fletcher Wallis at 18:06 1 comment:

The 46th International Antique Scientific Instrument, Early Technology and Medical Instrument Fair is held on Sunday 26 April 2009 at the Thistle Hotel Marble Arch in London. There are over fifty dealers from around the world offering the biggest and most diverse collection of instruments and books including: marine chronometers, navigational instruments, sundials, globes, weights and measures, physics demonstration and research apparatus, microscopes, slides and accessories, telescopes, telegraphs, medical and pharmaceutical antiques, surgical instruments, drawing instruments and early mechanical calculators and much more.
The fair is held from 10am-3pm at the Thistle Hotel Marble Arch, London W1H 7EH. Entrance price £7.50
for enquiries contact Matthew Nunn +44 (0) 7968 753 218 or go to www.apsleyfairs.com
The 47th Fair will be held at the Holiday Inn, Bloomsbury, Coram Street, London WC1N 1HT on 18 October
If you are interested in exhibiting at this fair please contact Desmond Squire, at dgsem(at)scienceantiques.com
Posted by Fletcher Wallis at 20:34 No comments: