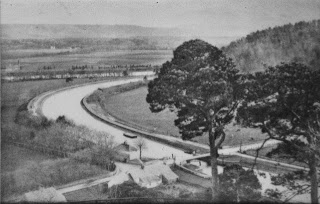 Photos courtesy of G P Matthews
What has John Benjamin Dancer got to do with the Large Hadron Collider. Absolutely nothing, except it makes for a catchy headline and also the fact that the LHC is undoubtedly the largest scientific instrument ever made, and the microphotographs of JBD are probably amongst the smallest objects to be seen at the 46th International Scientific Instrument Fair, to be held this Sunday, 26 April at the Thistle Marble Arch Hotel . Dancer was born in London in 1812, to a family of scientific instrument makers, and at 23, inherited the family business. He was involved with photography shortly after its invention in 1839. In 1841 he moved to Manchester where he remained for the rest of his life. He published a large series of microphotographs in the 1850s, 277 of which can be studied in the exhaustively researched history by Brian Bracegirdle and James B. McCormick, The Microscopic Photographs of J. B. Dancer. The subjects range from Sturgeon's Tablet in Kirby Lonsdale Church, containing 750 letters, the whole memorial reduced from 4ft to 2mm, to eminent figures in science such as Faraday, and Herschel, as well as poetry, Shakespeare, architecture, paintings and much more. According to the Manchester Microscopical and Natural History Society, Dancer was responsible for the first sending of microfilmed images during wartime, in the 1870s, during the Franco-Prussian War. He was posthumously awarded a Medal of Meritorious Service by the National Microfilm Association of the USA in 1960.
Graham Marsh, exhibitor at the Fair, has a database of instruments made by Dancer, at his Virtual Museum.
Posted by Fletcher Wallis at 00:30